IDAGIO is the leading streaming app for classical music with over 2 million tracks, exclusive releases and personalized recommendations. FEATURES • Browse the comprehensive collection and filter by composer, work, orchestra, soloist and more • Compare concert and orchestra recordings of the same work with ease • Discover new classical music with your personalized Weekly Mix • Get inspired with exclusive playlists curated by experts and artists from within the classical music community • Enjoy Gapless Playback • Play recommended tracks right on your Apple Watch • CarPlay: Enjoy IDAGIO while in your car • Global Concert Hall: Watch exclusive classical concerts live from the comfort of your home • IDAGIO Live: Join us for daily live talks, music and interviews from your favourite artists TRY FOR FREE: Not sure whether you want to upgrade to a paid subscription? You can try it for free and decide later, or continue using the app without paid features. IDAGIO PREMIUM+ • Play music everywhere and anytime with offline listening • Listen to your tracks without interruptions • Create your own playlists • High-quality audio (MP3 320kbps or FLAC 16bit 44.1kHz) • Connect to 3rd party devices like Sonos, Chromecast, Bluesound or Burmester • Select tracks with on-demand playback IDAGIO Premium costs $9.99 and IDAGIO Premium+ $12.99 per month - the subscription renews automatically and you can cancel at any time.* IDAGIO is the leading streaming service for classical music. Crafted in Berlin by a world-class team of over 80 passionate experts in music, technology, business and design, IDAGIO offers a search tailor-made for classical music, a catalog of over 2 million licensed tracks, and exclusive recordings and playlists - all available in CD-quality sound (FLAC). Each artist, orchestra and ensemble has a clear profile displaying albums and recorded works including filters such as composer, conductor, soloists and more. IDAGIO has subscribers in over 190 countries and the app has been downloaded more than 1.5 million times worldwide. Terms and Conditions: http://www.idagio.com/terms Privacy Policy: http://www.idagio.com/privacy ____ *) Prices may differ per territory. The payment will be charged to your iTunes Account at confirmation of the purchase. The subscription automatically renews at the end of your subscription period. Your iTunes Account will be charged for renewal within 24-hours prior to the end of the current subscription period. You can cancel your subscription at any time with effect for the following subscription period by disabling auto-renewal in your Apple ID Account Settings at least 24 hours prior to the end of the current subscription period. Any unused portion of a free trial period will be forfeited when you purchase a subscription before the end of the trial period. 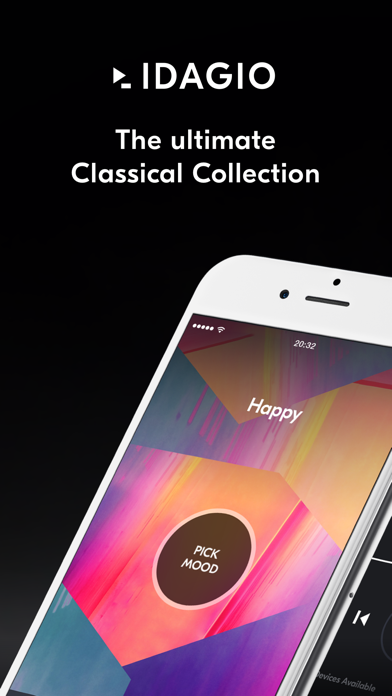 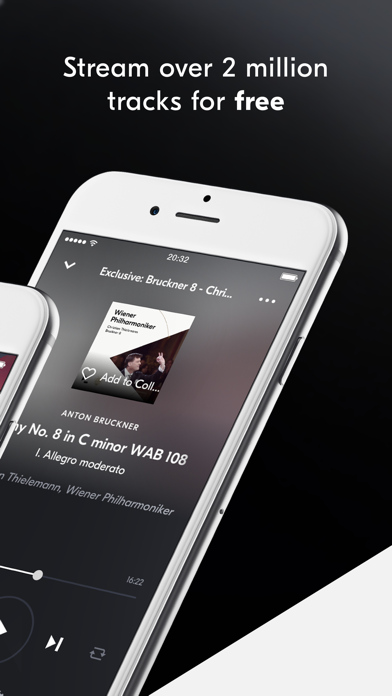 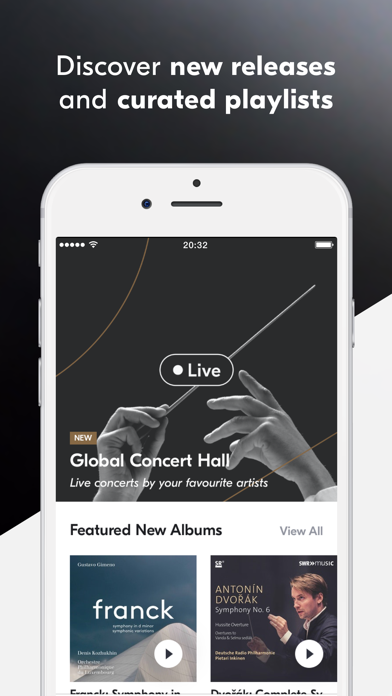 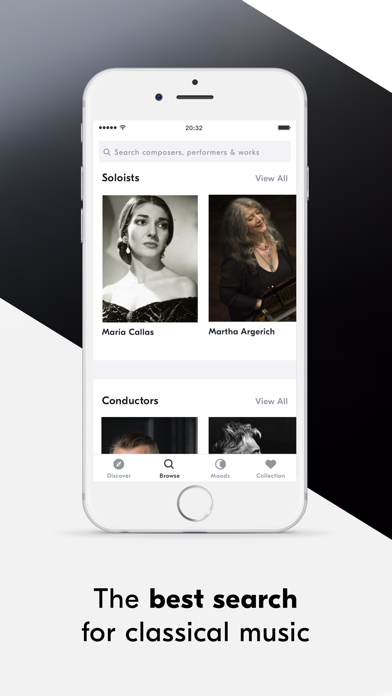 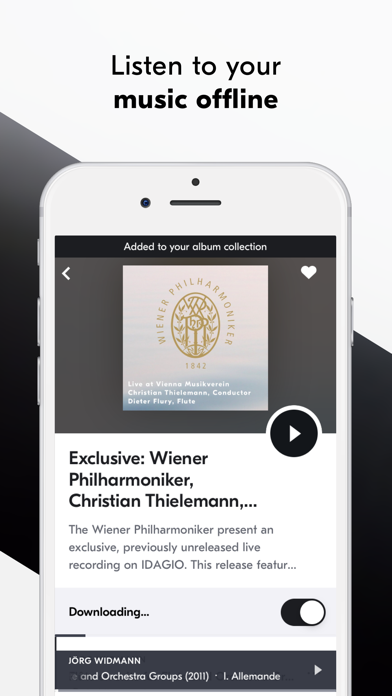 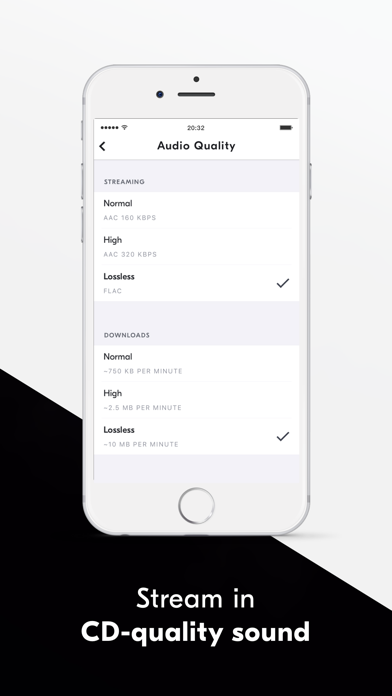 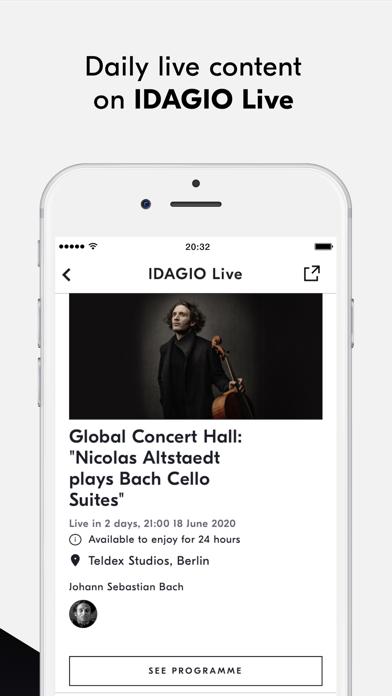 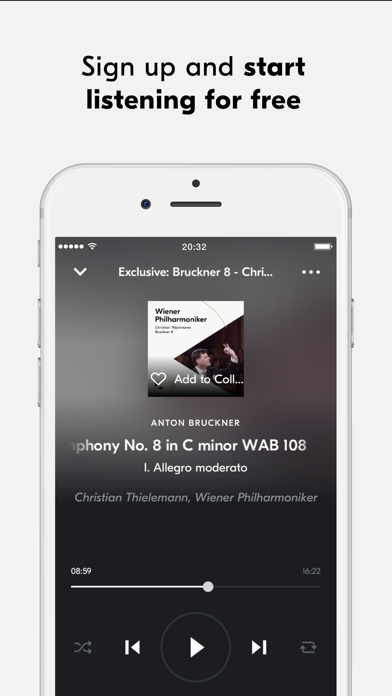 Google Casting only works from an Android device

I am not able to cast to my KEF LSII Wireless speakers from my iPhone 11 running 14.0.1. But it does works if I cast from my Samsung Note 20, I can’t be the only person that has discovered this. I have tried an iPad Pro and an iPhone Pro and still the same issue, I don’t think it’s a network issue since I can cast from an Android
By henrysv43

In comparison to other services, like iTunes, it is substantially better for classical, but still very poor in finding versions. And … I can change the language. Is it so difficult to add this feature?
By zterretz

Streaming quality is great but software is buggy

I need to begin by saying that I love this streaming service and listen to it everyday. The music selection and streaming quality is fantastic. And I also like the design of the user interface in the iPhone, iPad and MacBook apps (but I do seem to be in the minority with that opinion). My problem is that the software is buggy and keeps crashing on both my phone and MacBook. In particular it is problematic when I try to stream something to my Sonos or an airplay speaker. Despite the claims of the last update, this problem has not been fixed and it consistently crashes the app. You are better off using the Sonos app to select and play music from IDAGIO on a Sonos speaker. But unfortunately that interface is less elegant and I find it difficult sometimes to find the music that I want to play. The Apple Watch app is useless. You can o my use it to stream music to a Bluetooth device connected directly to the watch. It would be much more useful if it could be used to control what is being played on my phone or another device/speaker that is connected to the same WiFi network as my watch. The Spotify app does this very well, and I was hoping that the IDAGIO app would have similar functionality. But also it does not!
By SamW10019

The interface is confusing and poorly laid out. PC desktop only has option for casting to Sonos. iPad casting to Apple or Google devices constantly crashing. Audio quality is great but useless without better software. Need to hire better programmers.
By ultimate physics

The app is fantastic but

The Apple Watch app crashes, but otherwise on my phone the app is fantastic and I really enjoy choosing by the mood and of course this app is my favorite classical music app, app crashes on my Watch but not the phone. I would still highly recommend the app for people who loves classical music and and also because you get to choose music based on your mood
By Joan Alaniz

Fantastic for a non-expert

I have not listened to much classical music because I didn’t know what to listen to, and the music on the *other* streaming service was uninteresting and predictable. Listening to IDAGIO playlists, I feel as through a wise friend is taking me by the hand and leading me through a wonderful new world of music. So far I especially like the Music for Your Day, Listen & Explore, and Moods playlists to discover many new composers and musicians that I’ve never heard before, and I’m looking forward to exploring with my new paid subscription. Thank you!
By HS42-71

In general I love idagio and use it every day - BECAUSE it streams to my Sonos system. Suddenly today Sonos streaming would not work and a dialog popped up saying I have to reauthorize idagio with Sonos. I’ve done that twice now (apparently successfully since the Sonos app still shows the idagio service and idagio playback still works FROM the Sonos app) - but the idagio app just freezes every time I select to stream to Sonos. I’m putting this ‘ticket’ here because I see no place anywhere in either the idagio website or the idagio app to ask for help. Edit: I tested the Mac and Windows idagio apps and they are both streaming fine to Sonos. It’s the iOS and iPadOS apps that are failing (for me).
By bellevuedonnie

Am a subscriber and had no issues connecting the app w my Sonos system till last week. The Idagio app will not connect and play music via my Sonos system although I can connect to Idagio through the Sonos app. Reinstalling the app did not work. Waiting for a fix.
By BGhows